Wednesday's post was an introduction to the idea of signalling, especially "costly signalling". Here comes an application. The following draws on an idea put forward by economist Michael Spence, which is also the stuff of Bryan Caplan's upcoming book The Case Against Education.

Consider two possible ways in which university education may benefit those who get it:
The distinction might not be entirely clear at first, but as we unpack this a bit we will see that those two accounts of why people get university education have some very different implications.
Obviously, your university diploma may signal to employers that you have the desirable quality of having acquired marketable skills through education, but that's not what is meant by the signalling account. Rather, the idea is that going through the whole process of university education is a way of signalling qualities to others that you had all along.

Intelligence is probably the most obvious one. The fact that you've completed a course proves that you were smart enough to do so. Consider, however, that there are much cheaper and quicker (and actually more reliable) ways of assessing a person's intelligence. Then again, prevailing moral sentiments around intelligence testing have lead to legal restrictions on its use by employers.

Conscientiousness is a clearer case. Pen and paper intelligence tests for recruitment purposes make sense because it is impossible to fake a great score, however it is extremely easy to lie on a personality test. On the other hand, the less conscientious you are, the more costly it is for you to make it through a university course (all else being equal). The cost here is in terms of effort and perseverance. Thus people with a university degree are likely to be more conscientious than people without one.

A third quality that Bryan Caplan argues education serves to signal is conformism. Is that a quality you want? Well, I think you can easily see why it would be desirable to most employers. Employees should be able to get along with others and play by the rules without questioning them all the time. So, for signalling purposes, the fact that university education tends to be highly ritualised and ridiculously inefficient in its imparting of knowledge and skills might actually serve a function, namely that of filtering out those too unwilling to put up with it.

An essential point here is that, in order for education to serve its signalling function, it doesn't need to have any intrinsic value. An employer might hire a highly educated person not because he values their education, but because of their qualities that their education indicates they had all along.

The different implications of the two accounts can be expressed in terms of externalities: If the function of education is mainly to build human capital, then it can be argued (not that I would) that education has positive externalities, i.e. benefits incurred by people other than those who pay for it. To the extent that its function is for people to engage in competitive costly signaling, however, education actually has negative externalities, i.e. costs incurred by people other than those buying the education. As people acquire more and more education to signal to employers that they're better than the competition, more and more education becomes necessary to confer the same signal. And if education is wasteful, this translates to more and more waste. 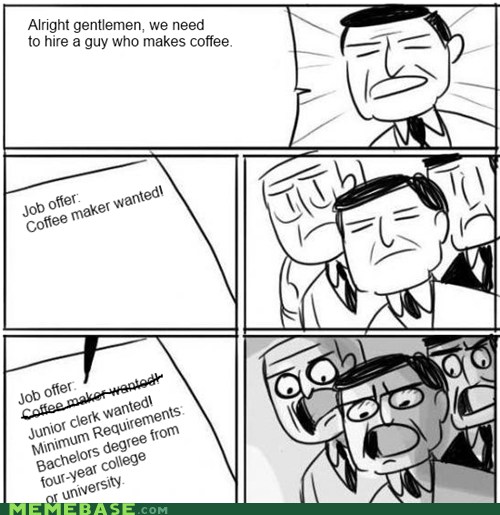 Externalities lead to market inefficiencies. In the case of a positive externality, the fact that you can benefit from something without being the one to pay for it disincentivises people from paying as much for it as they would if the benefits were exclusive to the buyer; hence less of it is bought; hence less of it is supplied. Conversely, the quantity of goods and services with negative externalities that is bought will tend to be higher than would be efficient.

There's bound to be problems with this approach. One problem is that the government doesn't have any good way of determining what quantity of a good with externalities it would be efficient to aim for, in other words what the size of the subsidies or taxes should be.

Education may well be an extreme example of this, where government's level of adjustment is not merely off, but headed in entirely the wrong direction. If education is mainly about costly signalling, then we already have a runaway process of increasing wastefulness on hand, and governments' subsidies serve only to exacerbate it. While subsidies for education make economic sense if education's externalities are positive (and I don't think this would even follow if the human capital account was really all there is to it), if education is mainly about costly signalling, then it would make a lot more sense for government to tax it.
Posted by Seb at 10:30